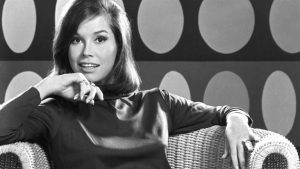 Earlier today, we found out that, after a hard fought battle with diabetes and other medical maladies, Mary Tyler Moore died at age 80.

Depending on how old you are, you might remember her as Laura Petrie, Mary Richards, Christine St. George, or Beth in Ordinary People. But Mary Tyler Moore wasn’t just an actress, and she almost walked away from it all.

In 1960, Mary Tyler Moore was a struggling actress. She’d booked several small roles in various TV shows of the day, but was about ready to hang it up and head home to Brooklyn.

Meanwhile, at the offices of the Columbia Broadcasting System, Carl Reiner was frustrated. After his first pilot based on his Show of Shows experience, starring himself had bombed, Dick Van Dyke seemed a perfect replacement, but after 3 or 4 rounds of auditions, they still had not found their Laura. Frustrated, he complained to actor-turned-producer, Sheldon Leonard – best remembered as Nick the bartender in “It’s a Wonderful Life,” now commemorated as the inspiration for the main characters names on “The Big Bang Theory.” Leonard told Reiner that “he would know when he found her.”

After 2 particularly bad auditions, Mary Tyler Moore was reluctant to even go into CBS studios for her audition as Laura Petrie. She probably would have skipped it altogether, had she known she was 11 years younger than the man who would play her husband. Still, she prepared and showed up. To hear Reiner tell the story, as soon as she said “Rob” with her lilting tones, he knew he had found her. He grabbed her by the head and all but dragged her into Leonard’s office, declaring “I’ve found her.”

It took a little more to convince Van Dyke. Concerned with leaving behind “Bye, Bye Birdie,” the Broadway show for which he had just won a Tony Award, he wanted everything to be perfect. A wife 11 years his junior, especially in the 1960’s wasn’t, in his mind, perfect. Plus, she had no comedy training, while he and the main players had extensive comedy backgrounds. But the chemistry between Dick and Mary was unmistakable, and she quickly picked up comedy timing from her co-stars.

In 1962, she married her second husband, producer Grant Tinker.

After the show’s 5 year run, she found herself pigeonholed as the dutiful wife. But when she proved herself in a TV special put together by Van Dyke, she and Tinker formed MTM Enterprises, and brought their first TV show to CBS – The Mary Tyler Moore Show.

While her namesake show lasted 7 years, she and Tinker would, through MTM, become a driving force of television, not seen since Desi & Lucy. In addition to the spinoff Lou Grant, MTM shepherded Rhoda, The Bob Newhart Show, Phyllis, WKRP in Cincinatti, Remington Steele, The Pretender, Evening Shade, Dr. Quinn Medicine Woman, Hill Street Blues,  and St. Elsewhere, among others.

Her final TV appearance was on her old friend Betty White’s TV Land show, Hot In Cleveland, where she played Betty’s cellie, then bowling team friend.

Her acting career spanned from 1959 to 2011, but her impact will be felt for generations. And she nearly quit, just moments before her big break.