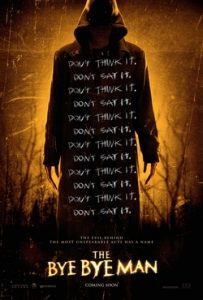 Went to an early screening of “The Bye Bye Man” today, followed by a Q&A with some of the filmmakers at the Chinese TCL, courtesy of STX Entertainment and GSCLA. Was fun seeing my pal Doug Jones in yet another soon-to-be-iconic role.

The movie was good, characters who made real world decisions (instead of acting like they’re in a horror film), and they had some good drama, twists and scares that were all earned. A couple of minor plot holes and a bit of backstory that had to be trimmed out or saved for potential future installments. Based on a short story that’s supposedly based on a true story, although they didn’t play on that trope in the marketing either.

The screenwriter and director are married, which I’m sure made for a easier time making the movie. He’s been an actor and a Survivor fan favorite for a few seasons.

The funny thing is, the way that ideas and themes creep in, even when the artists creating it aren’t even aware of it. I need to check out the original short story (which I think I actually own the anthology it’s in, strangely enough), but I would bet that what I noticed about the story wasn’t mentioned there.

No spoilers, but there is an indication of how to beat this particular boogieman (which hopefully they’ll pursue in the sequels and not be like the Elm Street movies, who forgot the solution until 6 movies in).

But go see it for yourself. If you’re into horror films.